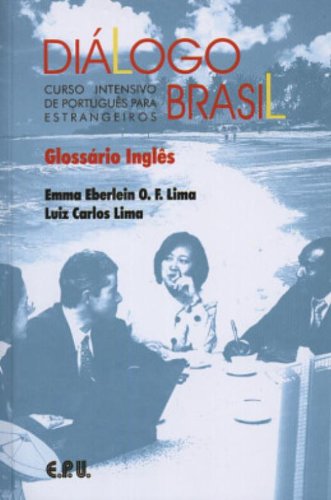 This glossary contains all the vocabulary used in Diálogo Brasil - Curso Intensivo de Português para Estrangeiros. It is not a substitute for a dictionary since the Portuguese words are translated into English according only to their particular meaning in the context of the lesson. Nouns in Portuguese are shown with their corresponding article and the words ending in -ão are presented along with their plural form. Whenever possible, an idiomatic expression is translated by a similar one in English. Words and expressions are listed unit after unit. In each unit they are introduced in the same sequence in which they appear in the lessons. At the end of the glossary you will find another set of new words which were introduced in the Audio Book of texts and exercises (Livro de textos e exercícios orais para audição). Words whose usage or cultural meaning are specially interesting for the foreigner are organized in boxes. They are usually the student's first step into the Brazilian habits and way of living and their explanation clarifies the deeper meaning of text and context. Número de páginas: 144